We have auto-selected a trusted Stelladoradus reseller in your country for you. You are buying from trusted reseller:

Advantages from buying from StellaDoradus: -Get advice and after sales support in your own language.StellaDoradus can advise you on the best booster for you.

A History of Mobile Phones 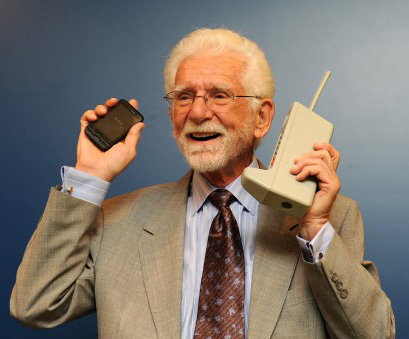 The history of mobile phones starts on the 3rd of April 1973, a senior engineer working for Motorola called Martin Cooper used a mobile phone to call a potential competitor in the mobile phone market. This was the first mobile phone call ever made.

Weighing 1.1kg, the phone that Cooper made the call from had measurements of 228.6mm by 127mm by 44.4mm and weighed 1.1kg. It was a prototype which took about ten hours to charge and you were able to talk for 30 minutes.

10 years later in 1983, the Motorola DynaTAC 8000X came onto the market costing just over a staggering €3,000. It was the first mobile phone to be released commercially offering 30 minutes talk time, with a facility to store 30 numbers and standby time of 6 hours. Several versions were made between 1973 and 1983. The products size and weight were reduced and in addition to the typical 12-key telephone keypad, it had additional special keys for storing, sending, recalling, locking, volume…

There is no doubt that in the early days mobile phone marketing was aimed at successful businessmen and the very wealthy. Even so, consumers were so impressed by the concept of always being accessible with a portable phone that waiting lists were in the thousands, despite the initial high retail price.

In 1898, Eduard Polón founded Finnish Rubber Works, manufacturer of rubber products, which later became Nokia’s rubber business. At the beginning of the 20th century, Finnish Rubber Works established its factories near the town of Nokia, Finland, and they began using Nokia as its product brand. In the late 1980’s the company decided to focus solely on the fastest growing segments in telecommunications, principally mobile phones.

Nokia had jumped on the bandwagon as a serious competitor to Motorola but the handsets were no more affordable. Made available to the public in 1989, Nokia offered its Mobira Cityman900, a handset weighing a mere 800g representing an enormous improvement on  previously released “brick like”  models.

Between 1990 and 1995 as technology advanced, the portability and design of mobile phones made them available to average consumers and by the end of 1990 they became the norm rather than the exception.

In 1997 the Nokia 6110 was the handset of choice for many people. The main improvements over previous models  were reduced size and improved talk time. It was also the first GSM phone to use an ARM processor. It also had an infrared port, interchangeable face plates and menu icons on the screen. Thanks to this phone, text messaging became mainstream in many countries. In 1998, Nokia passed the milestone of 100 million mobile phones manufactured. During that year, they sold 40.8 million phones.  Nokia officially became the world’s largest manufacturer of mobile phones.

The Motorola StarTAC was also popular in 1997. The inspiration for its design came from the communicator on Star Trek and pioneered the first clam-shell handset in the world, 60 million StarTACs were sold. StarTACs remained popular until the early 2000s, appearing in many Hollywood movies of the period such as 8mm starring Nicolas Cage.[wiki]

In 1999 the first Blackberry entered the market, manufactured by a company that would be crowned the fastest growing organisation on earth – Research in Motion Limited (RIM) 10 years after they released the Blackberry 850.

The BlackBerry 850 was one of the first mobile devices released under the BlackBerry brand name. The mobile communication device had a full keyboard, which was unusual at the time. It could send messages, access email, send and receive pages and act as a basic organizer. The BlackBerry 850 had a very small screen that could display a mere eight lines of text.[ehow]

In the three months following its announcement RIM’s stock went up 50 percent from just over $22 to around $33.50[zdnet]

The Nokia 3310, if you grew up during the mid to late 1990’s was the mobile phone that everyone wanted and indeed most people had. Even today, the Nokia 3310 is still regarded as the most indestructible mobile phone ever made. The antenna was designed into the phone itself. Although, aesthetically more pleasing  this was the beginning of antenna “size shrinkage”, which would fundamentally lead to poorer phone reception in future models down the line.

The first camera cell phone introduced commercially was the J-SH04 in Japan and the Sharp Corporation in November 2000. Priced at $500 US, the J-SH04 had a 110 000 pixel resolution (0.1 megapixels), a color LCD screen, one-touch Internet access and a speaker phone.[puremobile]

The first MP3 player phone was the Siemens SL45. It had a memory expansion slot and an MP3 player[wiki].

It also had a dicta phone and a WAP browser.

In the days before Samsung achieved world dominance they released in 2002, the SGH-T100, the first mobile phone using a thin film transistor matrix LCD display.

This was really the beginnings of a new breed of larger, higher resolution full color screens. Multimedia took on a new dimension from this point on. Not only was the screen bright, clear, and colorful, but was also quite large at 128×160 pixels. As it happened, Samsung was one of the world’s premiere LCD display manufacturers at the time.

The phone also had Polyphonic ring tones. This means that the sound system has multiple separate voices, each capable of creating a different sound at the same time. This allows the phone to create much better quality musical sounds. [mobileburn]

The Motorola Razr V3. The best selling clamshell handset ever to be sold on the planet, selling 130 million units from 2004 to 2006.  It was initially marketed as an exclusive fashion phone and had the thinnest profile at the time.

In 2005 the revolutionary Blackberry 7270 appeared featuring Wi-Fi leading to an addiction which was jokingly referred to as “Crackberry”. With the availability of the internet on mobile phones people became addicted to their Blackberry mobile phones, checking their email whilst brushing their teeth or at the dining table – it’s not so different today is it?

In 2008 the Apple iPhone 3G with its pioneering technology changed the way that we perceive mobile phones forever. The touchscreen interface on the iPhone became the design of choice and its apps were so popular that by 2010 Apple had sold 50 million iPhones and nowadays it is not unusual for sales to top 30,000 a month

There are of course, many other manufacturers of mobile phones who have based their designs on the Apple iPhone, and technology is progressing so fast that who knows what next year’s fashionable model will be? Perhaps we are even coming to the end of an era with hand held mobile phones. The Google glasses are on the market now and it is likely that these, and other wearable computers are the future of mobile communication.

The purpose of all mobile signal repeaters is to perform the same basic function they were designed for: to pick up the mobile signal at one location, and then reproduce (or “repeat”) the signal in an area or place that, for whatever reason, the mobile signal was not able to reach. It is a well [...]
read more

The pandemic caused by the SARS-COV-2 coronavirus, which causes COVID-19 disease, has put our public and private health services in peril. The virus’s frightening capacity to spread has led to thousands of outbreaks, and millions of infections. Many of these, due to the seriousness of the symptoms, have required immediate hospitalisation, including admission to intensive [...]
read more

Not too many of us who, when buying our new home, or making some renovations in our business, will think about which building materials are detrimental to our mobile phone reception. We tend to focus more on other aspects, such as energy efficiency, aesthetics, or comfort. Usually, we only discover the problem when we are [...]
read more

We use cookies to personalise content and ads and to analyse our traffic. We also share information about your use of our site with advertising and analytics partners who may combine it with other information that you’ve provided to them or that they’ve collected from your use of their services. You consent to our cookies if you continue to use our website.OkPrivacy policy