We have auto-selected a trusted Stelladoradus reseller in your country for you. You are buying from trusted reseller:

Advantages from buying from StellaDoradus: -Get advice and after sales support in your own language.StellaDoradus can advise you on the best booster for you. 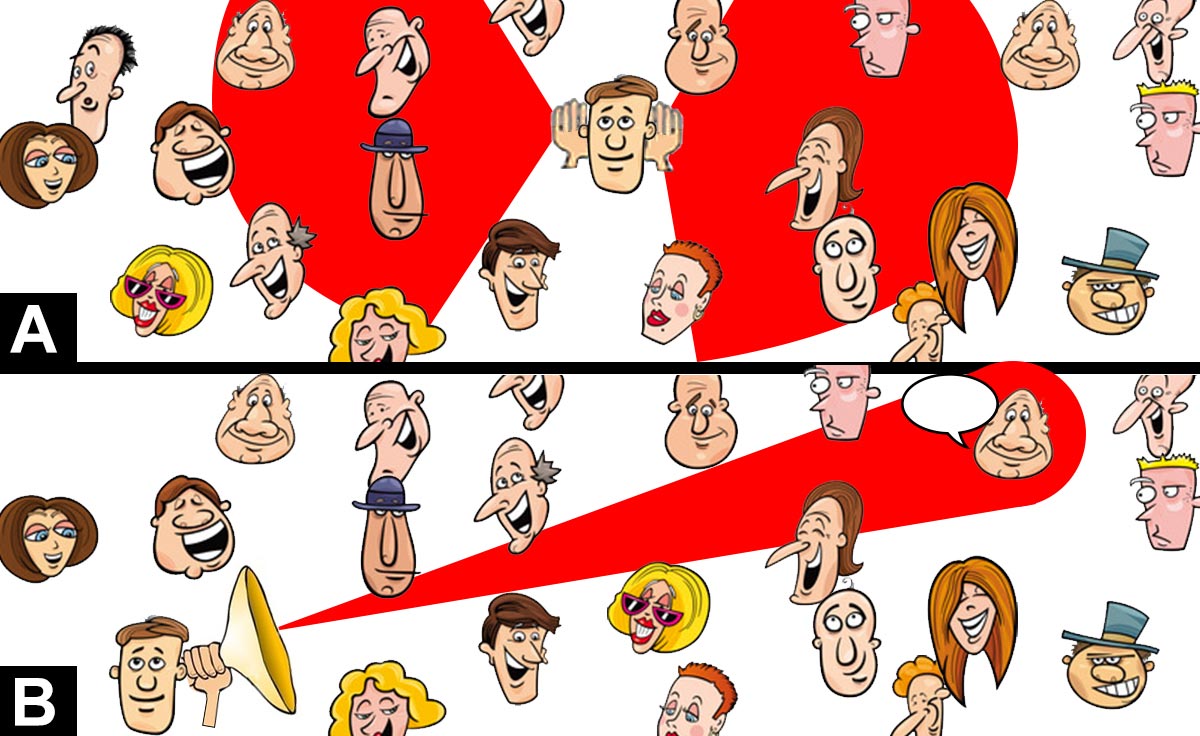 A: You can hear everybody around you but only in the close vicinity. This is similar to an omni-directional antenna.

B: You hear only one person clearly, but that person can be quite far away. This is similar to a directional panel antenna.

Everyone knows their mobile phone has a built-in antenna, somewhere in the phone. Most people have heard about the poor antenna designed into the I-phone 4 when it first came out, and many people were amazed when Steve Jobs mentioned,

“tell them to hold (the phone)  differently”.

An analogy is the best way to describe this. Lets say your at at party surrounded by people chatting.

Everyone is talking at the party and it is even hard to hear the softly spoken person opposite you. Your ear is an antenna, so you turn your head to hear what is being said. This still is not good enough so you take out a cone, shaped like the one you see on a megaphone, put the small end to your ear and point the large end at the softly spoken person.  Now you can hear what he is saying, and the surrounding noise of all the other people talking has reduced. If your ear is an antenna, using the cone is like increasing the gain of the antenna. The results of a well designed higher gain antenna is that you “hear” more of the signal you want and less of the signals you don’t want. But you have to be more careful about how you point the higher gain antenna.

Stelladoradus supplies a directional outdoor antenna as standard. Ie, you need to point it at the operators mast.  However,It is a medium gain antenna. This means it is more forgiving if you point the antenna slightly in the wrong direction. Higher gain antennas are also possible and should be used in very poor signal areas (like trying to hear that very softly spoken person at the far side of the noisy room. You are going to need a very large cone.)

If you do not want to go to the effort of pointing the antenna, or you need to connect to several base stations at once, then an omni-antenna is recommended  but do bear in mind, this could increase the noise experienced by the repeater system overall.

You should be in a strong signal area before using an omni-antenna.

Note: Using a megaphone at a party to hear the softly spoken person next to you WILL help your hearing but may result in a reduction of social value.

Mobile phone booster installation guide In this article, I will discuss the topic of “antennas” for repeater installations. Whether you are installing mobile phone repeaters in big buildings or homes, this guide is for you. After this article, you will understand, what type of internal antennas to use for your building, where best to place [...]
read more

Parabolic Dish in the City - Multiple Base Station Issue.

We use cookies to personalise content and ads and to analyse our traffic. We also share information about your use of our site with advertising and analytics partners who may combine it with other information that you’ve provided to them or that they’ve collected from your use of their services. You consent to our cookies if you continue to use our website.OkPrivacy policy